Amazon is planning a $40M robotics hub near Boston – TechCrunch 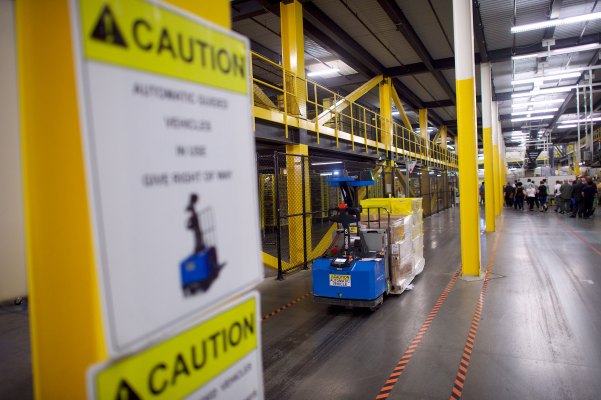 Amazon announced a plan today to build a $40 million, 350,000 square foot robotics innovation hub in Westborough, MA. The new facility will bring 200 technology and advanced manufacturing jobs when it opens in 2021.

The new facilities will include corporate offices, research and development labs and a robotics manufacturing space. The company said that this new facility will be in addition to its existing Amazon Robotics site in North Reading, MA.

Tye Brady, chief technologist at Amazon Robotics says the new hub will allow Amazon to continue to build on its robotics research. “This will be a world-class facility, where our teams can design, build, program and ship our robots — all under the same roof. This expansion will allow us to continue to innovate quickly and improve delivery speed for customers around the world,” Brady said in a statement.

Amazon bought Kiva Systems, a company that was developing order fulfillment robots, in 2012 for $775 million in cash, and then renamed the company Amazon Robotics. A lot has changed since 2012, and today the company has deployed more than 100,000 robotic systems in more than 25 fulfillment centers across the U.S, and has more than double that in place worldwide including both Amazon and third-party usage, according to data supplied by the company.

Amazon is not new to Massachusetts. It has had a presence in the Bay State since 2011 has invested over $3 billion and created more than 4,000 full-time jobs in Massachusetts, according to data supplied by the company.

Westborough is a suburb located about 35 miles west of Boston.