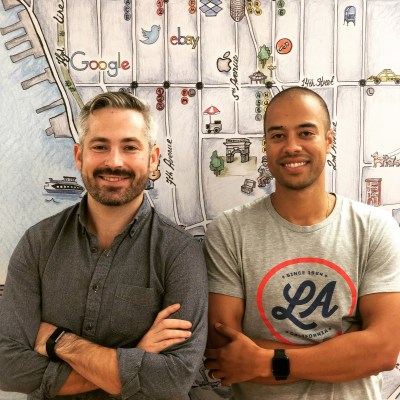 There has been a proliferation of venture capital the past few years, as funds go up and down the stack looking for unique and high-return opportunities in the startup landscape. Large funds are increasingly investing in small rounds, which has forced seed investors to answer much more carefully why they should exist in the first place at their stage.

For Richard Kerby and Rick Zullo, the answer is that seed investors can still build an edge by carefully constructing theses and working in-depth with a small set of determined founders.

The two up-and-coming venture investors announced the closing of their debut fund for New York City-based Equal Ventures today, locking in $56 million in capital from a range of institutional and select venture GP limited partners. The two came together last year following stints at other VC firms: Kerby spent multiple years at Venrock in NYC, while Zullo was an investor at Chicago-based Lightbank.

The two believe that a concentrated and thesis-driven investment model for seed will win out against casual, spray-and-pray investors as well as larger firms who dabble in seed as a way to build up their cap table positions for later-stage rounds.

While the fund is officially closing this week, the firm has already been busy, locking in more than half a dozen startup investments in areas like retail, logistics, and talent. The firm targets a median check size of roughly $1.5 million, and will presumably reserve a hefty chunk of its fund for follow-on investments.

One element that Kerby explained to me that differentiates Equal from other firms is the firm’s lack of focus on the technical background of its founders. He and Zullo believe that modern SaaS tools and more democratized business platforms make it easier than ever to start digital businesses, even without a background in computer science or that fancy alphabet soup of AI/ML.

Instead, the pair are focused on founders addressing markets and industries that have been sorely under-invested by VCs over the past two decades, hoping to help heal the digital divide and “transform society.” Zullo explained that he and Kerby repeatedly ask “How can digital really reinvent the ways our lives operate?” and says that the framework behind the fund were inspired by Carlota Perez’s book “Technological Revolutions and Financial Capital: The Dynamics of Bubbles and Golden Ages.” Ultimately, they believe that deep insights about a specific market will ultimately yield far better returns than focusing on the next product or technical founder without that in-depth market experience.

Kerby explained that the firm intends to have three active theses at any one time. Those theses may stay the same or change quarterly as he, Zullo, and their investor teammate Ali Afridi (also formerly of Lightbank) explore different subjects. That analytical work is meant to help identify specific problems demanding solutions by startups, which then prepares them to identify promising companies as they source them in their process.

Equal also intends to opportunistically incubate companies. So far in its portfolio, two companies have been incubated internally, and Kerby believes that the firm will continue at that rate for the foreseeable future.

The firm was named Equal both because the two investors are equal partners in the firm (and they say that future partners would have the same economics), but also because the two see an opportunity to provide every entrepreneur a more equal footing to access venture capital. Kerby has researched the issue of equality in venture over several years (you can read my colleague Megan Rose Dickey’s analysis of it from two years ago), and so when the two set out to build a new firm, they wanted to be able to reach out to as many types and backgrounds of entrepreneurs as they could.

Following that notion of equality and the spread of software tools for building startups, Kerby and Zullo aren’t limiting themselves to their local NYC market. They are relatively agnostic on geography, and certainly the teams they are backing are often spread across a number of countries with remote work setups.

Ultimately, the hope is that a more Equal model of investing at the earliest stages will create opportunities not just for their firm, but for a whole new generation of entrepreneurs.