A startup called Our.News is working to make its users smarter consumers of the news.

In other words, it’s confronting some big, seemingly intractable problems. For one thing, there’s a tremendous amount of disinformation online — as Our.News founder and CEO Richard Zack put it, “Unfortunately, you have thousands of people all over the world who intentionally make it hard for people to know what’s true.”

All of this adds up to an environment where no one is quite sure what to believe, or they simply accept the stories that reinforce their existing beliefs.

“You can’t fight misinformation by telling people what’s true, because they don’t believe it,” Zack said. His solution? Something that he described as a “nutrition label for news.” “It doesn’t tell you it’s good or bad, it doesn’t say buy it or don’t buy it, it leaves the buying decision in the hands of the consumers.”

In some ways, the approach is similar to NewsGuard, which rates online news sources. In fact, Zack said, “We really support NewsGuard and what they’re doing.” Still, he suggested that evaluating publishers isn’t enough, which is why Our.News provides labels for individual articles — he compared it to “trying to choose between Lucky Charms and Cheerios,” where it’s not enough to know that both cereals are manufactured by General Mills.

To put it another way, you don’t want to just accept what a publisher tells you. Even the best publisher can make mistakes, so you also want to understand what claims they’re making, what their sources are and whether those claims have been vetted by independent fact checkers. 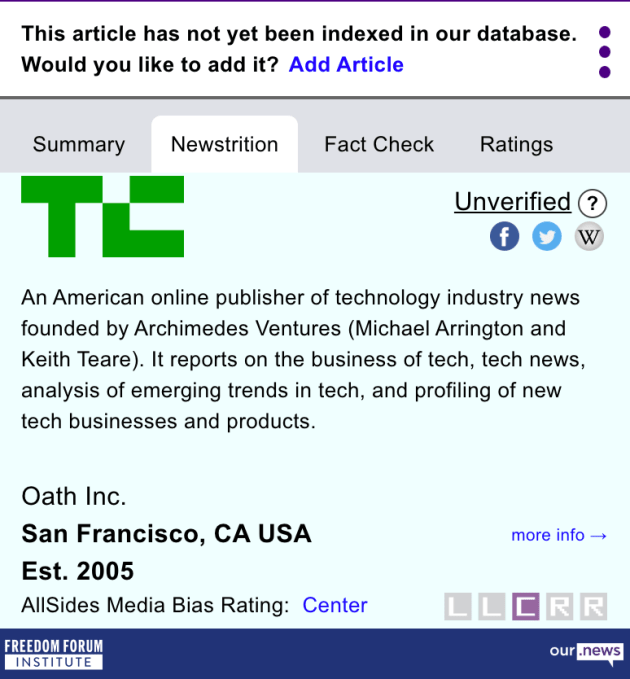 An Our.News label is accessible through Firefox and Chrome browser extensions, as well as an iOS app. The label includes publisher descriptions from Freedom Forum, along with bias ratings from AllSides; information about an article’s sources, author and editor; fact-checking information from sources like PolitiFact, Snopes and FactCheck.org; labels like “clickbait” or “satire”; and user ratings and reviews.

Zack said Our.News has created around 600,000 labels to date, generating about 5,000 new ones every day. Of course, there’s still a good chance that the article you’re reading won’t have a label, but if that’s the case, Our.News might still be able to show you publisher information, and users can also click a button to add the article into the system.

“We’ve intentionally combined objective facts [about the article] with subjective views,” Zack added. “We think that’s the solution … If you go purely subjective, then it’s just a popularity contest. If it’s just objective, then who’s the determiner of truth? We’re mixing the two together, condensing it all into the nutrition label, so news consumers can more quickly make their own decision.”

He also acknowledged that different users will treat the labels in different ways. Some, for example, may still not trust the fact-checkers, but even then, Zack argued there’s still value in giving them a way to provide feedback to publishers in a way that’s more structured than a regular comments section.

He also noted that user ratings will be weighted based on their interaction with the label — if you skip the publisher information, skip the sources and skip the fact-checking, then your rating won’t be worth as much as someone else who carefully considered all of that information.

In addition to its current, consumer-focused distribution, Our.News just launched a way for publishers and other businesses to incorporate its labels. Zack said this could be used by “news publishers, content aggregators, social networks, anywhere that’s displaying articles.” (This is also how he plans to make money.)

The hope is that Our.News partners can use these labels to make readers more comfortable trusting their content, and to collect feedback from those readers. There will be some degree of customization available, but Zack emphasized that publishers won’t be able to change the actual content of the labels.